There Goes That Song Again Special

About There Goes That Song Again Special

You can email Brian with your comments or requests at briancrabbe8@gmail.com

You can also hear a selection of programs as podcasts, at mixcloud.com/theregoesthatsongagain or by clicking on the date of the program below.

THIS PROGRAM IS USUALLY A REPEAT OF THE SPECIAL AIRED 2 DAYS EARLIER, ON WEDNSDAY AT 11AM.

In our Special in our second hour today, we’re featuring “Answer Songs”.   Do you remember back in the 1950s and 60s, there were a number of songs which generated other songs in reply?  Most were songs by country music artists.  One original by Hank Loughlin was a hit for him in 1960 called “Please help me I’m falling” and later the same year Skeeter Davis replied with another song “I can’t help you (I’m falling too)”.  On the strength of that success, Skeeter recorded five more answer songs, released on an album which included the initial songs by other artists.    In our Special today, you’ll hear those songs, both the originals and the answers.

This week, we hear more songs by Bing Crosby from his radio sghows in the late 1940s.

Last Friday morning, here in Australia we woke to the very sad news that our much-loved Queen, Elizabeth the Second, had died overnight, our time.  She came to the thrown in February, 1952 when her father, King George the Sixth, died suddenly.  On our TGTSA Special today, we’ll hear some of the songs that were popular in 1952.  The Queen herself was no stranger to popular music, having attended many Command Performance concerts in London during her lifetime. After the concerts, the performers would typically stand in line to be introduced to the Queen and she would exchange a few words with each of them. Many of them later recalled it was one of the most memorable occasions in their careers.   Frankie Laine recalled the occasion in 1954 when he met the Queen.

This week in our Special, we’re entertained with songs by Bing Crosby from several of his radio shows in the 1940s, sung in Bing’s typically relaxed style.  Listen out for one in particular which is more like a rehearsal: “Time after time” which Bing sings with Les Paul on guitar.    But it got plenty of laughs, so obviously Bing was happy to let it go to air!

This week, Brian’s guest is Gary Pinto.  A veteran of the Australian music industry of over 30 years, Gary’s many activities include performing on stage and in the studio with artists such as Guy Sebastian, Jimmy Barnes, Christine Anu and Taylor Dayne, and he has worked on Australia’s biggest music shows, X Factor and The Voice, as Vocal Director and Vocal Coach for the past 10 years.    You might think he doesn’t sound like someone who would fit the 1940s, 50s and 60s genre of “There Goes That Song Again”?   Well, Gary does, because earlier this year he recorded a tribute album to a very popular artist of the late 1950s and early 1960s, Sam Cooke.  What’s more, Gary is presenting a concert featuring Sam’s music at the Opera House this Friday night.   In Brian’s Special this week, we hear Gary talk about, and sing, many of Sam Cooke’s hits as well as some of Sam’s Gospel songs, and more.  That will start a little earlier this week: soon after 10.45am if you’re listening on Wednesday and 2.45pm if you’re listening on Friday.

Listeners will have heard the sad news  that Judith Durham died in Melbourne last Friday wek, 5th August, at the age of 79.    She of course is best known as the female singer with the vocal group The Seekers, although she had a very considerable solo career as well.   In our Special in his second hour this week, we’ll pay tribute to Judith, and replay a previous Special featuring their 1968 concert televised by the BBC.

This week in our “Special”, we feature Howard Keel at the movies.    Howard was one of the most popular stars of Hollywood musicals in the early 1950s, having leading roles in many of the best known musicals of that era.  They including “Annie get your gun”, “Showboat”, “Kiss me Kate”, “Seven Brides for seven brothers” and many more.

As our Special in our second hour today, we have the original Broadway cast production of “Call me Madam”. The original recording RCA Victor recording did not include the star of the show, Ethel Merman, because she was contracted to Decca.  Decca released a studio album of Ethel singing her songs, with other Decca artists singing the other songs.  But we have a composite presentation today of the original cast plus Ethel.

Our Special this week is “The Essential Broadway – Part 2”, continuing a program aired in January with more of the best loved songs from Broadway shows.  Most of the performances are from original cast productions, others from revival productions.

The Weavers were a very popular American vocal group in the very early 1950s, but were then black-listed in the McCarthy era, preventing them from performing on radio and television and their records were withdrawn from sale.   In December, 1955, they held a “come-back” concert in Carnegie Hall, beginning a return to their popularity.  We’ll hear that concert in our Special today.

In our Special in our second hour this week, we’ll hear another of  Spike Jones’  radio shows from 1948. We’ll again also hear the original hit versions by other artists of some of the songs.

In our Special in our second hour this week, Brian features Spike Jones and plays the first of two radio shows from 1948 starring Spike. We also hear the original hit versions by other artists of some of the songs.

We have a 2-hour Special today, beginning at 10am Wednesday and 2pm Friday.   Brian Crabbe was an avid listener to radio while growing up Sydney in the late 1940s, the 1950s and the 1960s. With the recent closure of iconic Sydney commercial station 2CH after 90 years on air, this week Brian remembers some of the presenters on 2CH who played the music of that period, either at the time or reminiscing in more recent years.   Included are Bob Pollard, Walter Elliott, Brian Henderson, Max Rowley, Dal Myles, Howard Craven, Phil Haldeman, Sam Kronje, John Mahon, and in more recent years Ward Austin, Chris Kearns and Bob Rogers.  It’s a two-hour Special with lots of audio excerpts and music of the period.

In our “Special” this week, you’ll hear a concert by English film star and singer Julie Andrews and American comedian Carol Burnett    It was held at New York’s Carnegie Hall and broadcast on American television on 11th June, 1962, exactly 60 years ago last Saturday.   Julie and Carol were quite different personalities, but as you’ll hear in this concert. they gell together very well.

This week we feature Band Leaders who also sang.

In the movie “Tea for Two” based on the stage show “Non, No Nanette”, Doris Day won a bet with her uncle by always answering “No”.   Well, there are plenty of songs that have the word “No” in the title. We’ll hear lots of those in this week’s Special.

Yet another anniversary of a birth and yet another great interview by Bob Rogers.  That’s in store for us today on our TGTSA Special as we celebrate the 101st anniversary of the birth this Wednesday 25th May of popular American singer of the 1940s and 50s, Kitty Kallen. Kitty first came to fame in the early 1940s as a singer with several of the best-known Big Bands, including Jimmy Dorsey and Harry James. But it was not until ten years later she had her biggest hit “Little things mean a lot”.

This week we have a 75 minute Special in tribute to Perry Como for the 110th Anniversary of his birth on 18th May, 1912. His manager, orchestra leader, and his daughter fondly reminisce about him in this program produced and presented by Americal radio presenter and Perry’s friend, Johnny Knox, not previously broadcast on 2RRR.

Saturday, 7th May this year was the 91st anniversary of another American singer very popular in the 1950s, Teresa Brewer.  So we’re paying tribute to her in our Special today.    In 1999, just before Teresa’s 68th birthday, Bob Rogers interviewed her, and with thanks  to Bob, we’ll hear that interview and lots of Teresa’s songs.

Ahead of Mothers’ Day this Sunday, we’ll celebrate with a whole hour of songs about mothers.

This week on our ‘There Goes That Song Again’ Special, we celebrate the 103rd Anniversary of the birth of Don Cornell this Thursday, 21st April. You’ll hear lots of Don’s hits, along with an interview with Don and Sydney radio personality Bob Rogers, recorded in the late 1990s. 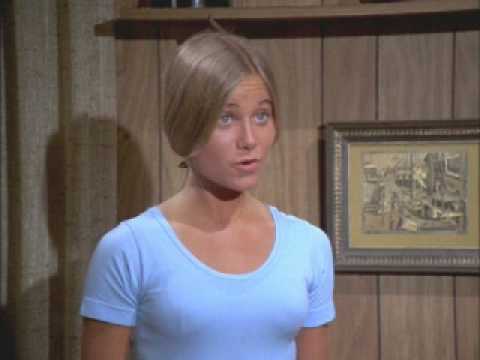 ”He’ll have to stay” – Skeeter Davis 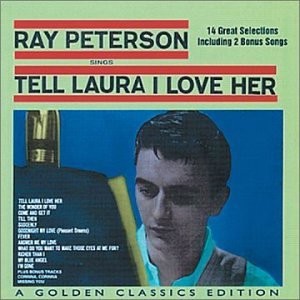 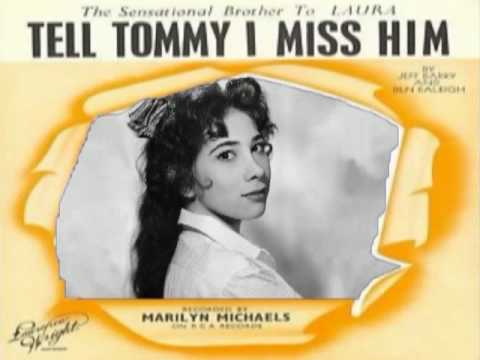 “I really want you to know” – Skeeter Davis “I want to see you too (just one time)” – Skeeter Davis

I’ve got the sun in the morning – Bing Crosby

You are too beautiful – Bing Crosby 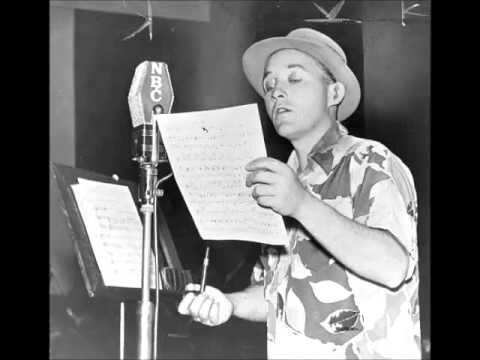 That little dream got nowhere – Bing Crosby with Skitch Henderson

I’m going down the road – Bing Crosby with Burl Ives

The things we did last summer – Bing Crosby 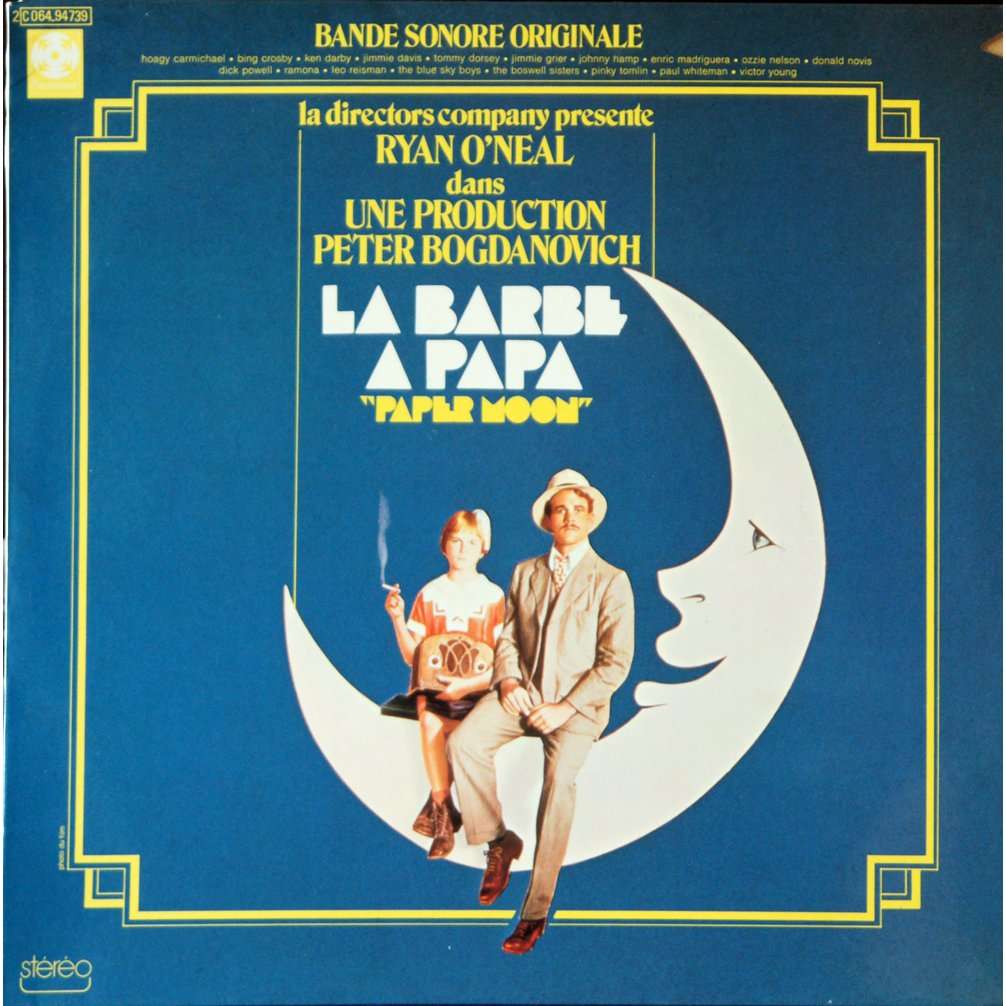 "Cousin of mine" – Gary Pinto

"Bring it on home to me" – Gary Pinto & Guy Sabastian

“Manhattan Downbeat” from “The Barclays of Broadway” (1949) – Fred Astaire 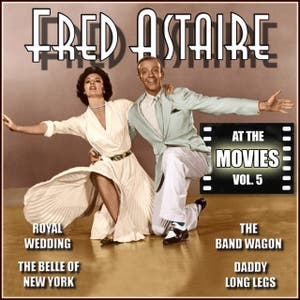 "Young folks should get married" from "Texas Carnival" (1951) – Howard Keel “It only happens when I dance with you” " " – Fred Astaire 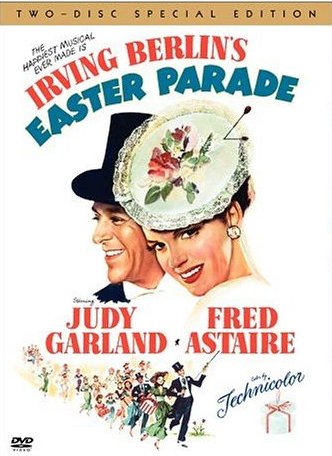 “To each his own” – Eddy Howard

“That’s what I like about the south” – Phil Harris 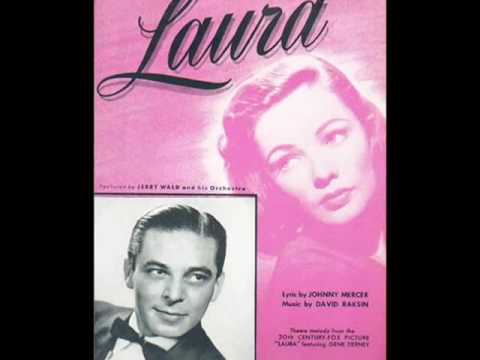 “The object of my affection” – Russ Morgan “Gotta be this or that” – Benny Goodman “I can’t get started” – Bunny Berigan 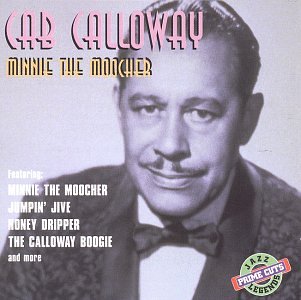 “The Lady’s in love with you” – Bob Crosby

“The Waiter, the Porter, and the Upstairs Maid” – Jack Teagarden 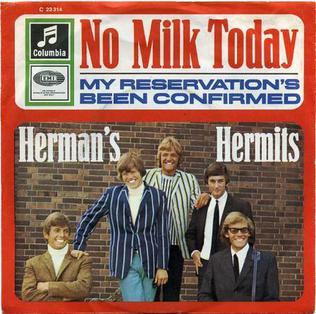 “No love, no nothing” – Alice Faye

“No arms can ever hold you” – Bobby Vinton

“No other arms” – The Chordettes

“No moon at all” – The Ames Brothers

“No other love” – Perry Como “No other love” – Jo Stafford

“No love but your love” – Johnny Mathis

“(Your lips tell me no no, but) There’s yes yes in your eyes” – Teresa Brewer

"If I give my heart to you" – Kitty Kallen

"If someone had told me" – Kitty Kallen

“What a wonderful world” – Teresa Brewer 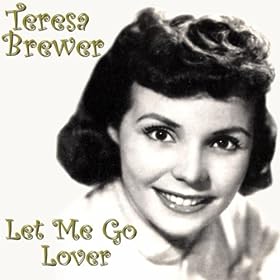 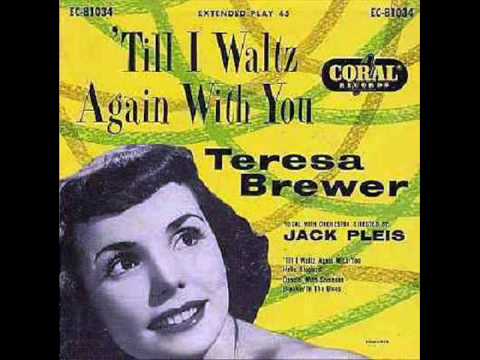 “Til I waltz again with you” – Teresa Brewer

“You send me” – Teresa Brewer

“The banjo’s back in town” – Teresa Brewer

A mother as lovely as you – Johnnie Ray

Does your mother come from Ireland? – Bing Crosby

Mama do I gotta? – Dinah Shore 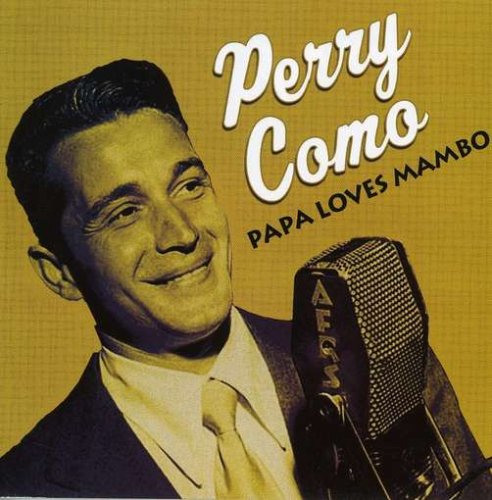 Rhythm and Blues – The McGuire Sisters

Throw Mama from the train (a kiss, a kiss) – Patti Page

Was that the human thing to do – Don Cornell 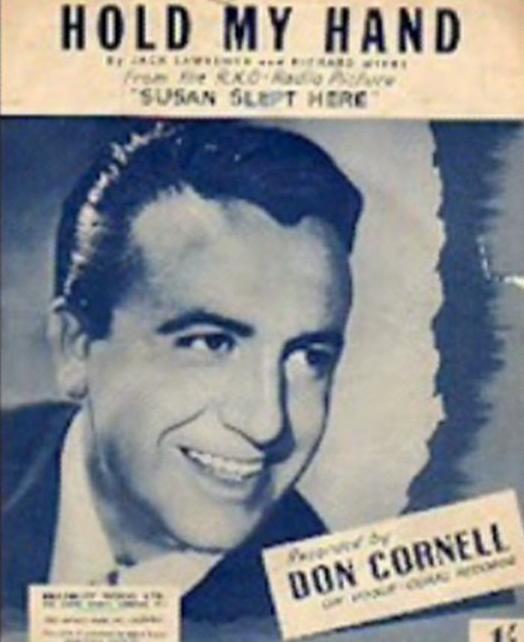 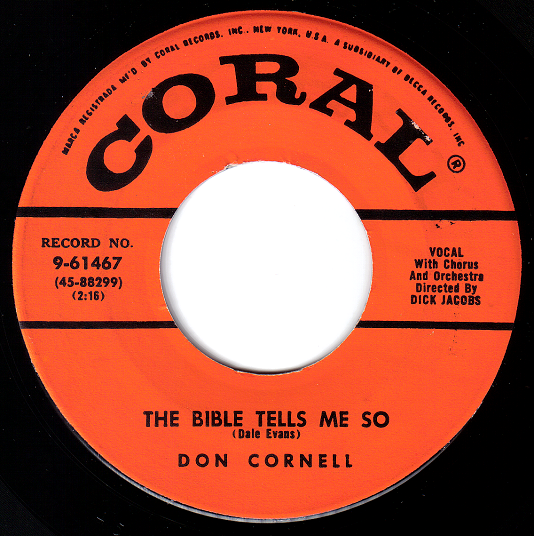 The Bible tells me so – Don Cornell

All of you – Don Cornell 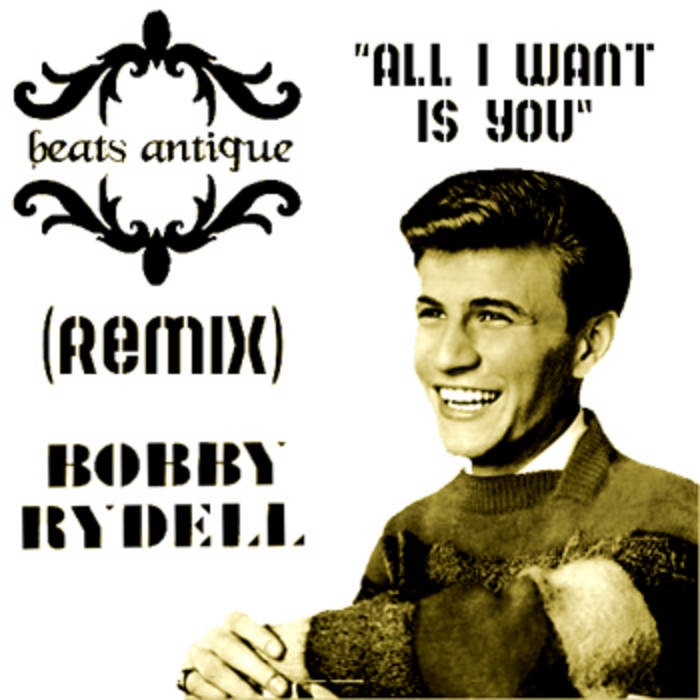 "All I want is you" – Bobby Rydell

“We got love” – Bobby Rydell